When booking this trip we found that the Mirage had a convention staying at the hotel and as such the prices really surged for the second part of our trip. The first 3 nights were around $200 a night but after this, they doubled to over $400 and night! We decided the best plan was to split the trip into two hotels. The second stop being Planet Hollywood.

Check-out of the Mirage

As we headed to the lobby it was clear things had altered at the mirage. The whole place was rammed with folks, all sporting Lanyards with Id’s a clear sign of convention-goers. We had a final treat at the Mirage in a BOGOF for the Breakfast buffet so we ate one last time here before checking out. The breakfast buffet is pretty cheap at $18.99 but at BOGOF Prices it’s a steal. It comes with included wine and beer but even we could not face that this morning …well maybe a quick Mimosa.

As we were planning on hitting the road after Vegas we needed a car, we didn’t get one straight from the airport for a number of reasons, we didn’t need it so it would be wasted in the Mirage Parking that we would have to pay for and we would probably have had too much to drink on the plane anyway. But as we wanted to head to the outlets later and needed an Uber to move hotels anyway we headed to the airport instead to grab the car now.

We have booked through RENTAL CARS and just needed to pick up. We used Dollar and they were absolutely perfect. Once we dealt with the paperwork we headed off to the garage to get the car. We had a selection of 5-6 nearly new Mid-Size SUVs to choose from and we ended up with a nice grey Nissan Rogue.

There was a ton of room for our luggage and off we went.

We are big fans of Outlet Shopping you really can grab some great bargains, but not all Outlets are as good as the others, we find Las Vegas North Premium to be right up there, so we always make time for a visit. Today we were royally rewarded and ended up snagging some real bargains, with prices up to 70% off in some of our favorite brand stores. We won’t bore you with the specifics but we got some real treats for very little money. They really are worth checking out if you are in the market for some big brand items.

After this, we needed to nip to best buy to replace a go-pro that had gone missing at some point on our journey out here. Then it was off to Planet Hollywood for check-in

We chose Planet Hollywood for a couple of reasons, one, it was free parking so we could get the car early, and second, it was just about the cheapest place to get a fountain view room. Most of the hotel has now been recently remodeled and the rooms are really quite nice and modern. We had booked a fountain view room as this was pretty important to us. We often use the $20 Trick to grab upgrades but the rule to this is not to rely on it. If something matters to you, book at that level and use the trick to get further upgrades. We ensured we tipped well though as the fountain view rooms vary in quality of view, you need to be high to get a good view and the $10 in our hand when asking for a high room ensured a floor 38 room, which is the highest level. As for the view…It was alright 😉

Unfortunately, our plans had taken a bit of a hit today. The wonderful Vegas weather had decided to turn on us. High-winds had whipped up and clouds were building fast with heavy rain forecast for later…this was meant to be the desert. We decided against our plans of heading to Downtown and the Stratosphere on the Big Bus open top Tour, all of which was on the pass and just settled for our evening plans after spending some time by the pool until the weather sent us to the safety of our room. This proved to be a Big Mistake.

The first stop for us was NYNY We had the last of our MyVegas rewards to use and that was $50 Drink Credit in Times Square Piano Bar. We got there for happy hour and $50 goes a long way at this great Happy hour, Next up we decided to hit the Roller Coaster which was included on the Pass.

The New York Roller Coaster, Or the Big Apple Coaster as it is officially called is actually a pretty awful coaster. To be clear we are BIG Coaster fans and love riding the biggest and best all over the USA, and beyond. But the Big Apple is just appallingly rough. It is, in theory, a pretty good layout with a loop and some great turns, drops, and some good airtime. But the execution is terrible and it is nearly the worst coaster we have been on in terms of roughness. Still, it is a must-do when you are at New York New York, and very unique to be zooming around the Vegas strip on a coaster. Anyone with a bad back or something similar should definitely avoid…like the plague!

After this, we headed back to the casino for a spot of gambling. Which is where disaster struck.

The bad weather has also taken a toll on our planned Rockstar Club Tour. Seemingly many people on the tour had decided the weather was a no go and had dropped out meaning there were not enough people to run the tour and they had canceled the tour. This meant we were left with very little to do this evening and not making full use of the card. However, we were able to Re-book the tour for a different evening, even though our pass ended today so we still got the tour included. It just ruined tonight’s plans.

In the end, we simply stayed at New York New York Gambling. We hit a few good jackpots on the Slots and kept playing. The wins were not enough to cash in so it just meant we could play on and on, while we picked up quite a few free drinks. As ever our go to is a Vodka Martini.

After an hour or so we had run down our wins and were running our budget’s to zero. So we headed back to the room to simply spend some time with our incredible room View!

Tomorrow was going to be a real Epic day. We had some pretty special activities planned, and both of us would be ticking things off the bucket list. With this in mind, we headed to bed early so we would be fresh and ready for what could turn out to be one of the best days of our lives…

Today’s pass usage was somewhat subdued by the weather. We had a lot planned that got canned due to storms and high-winds moving in. But we still got good value. As we were able to re-Arrange the Club Tour we are still counting this in the attraction calculation.

So in total, we save a huge $273. Which is pretty good going. We attempted to show how easy it is to save a fortune with the pass. There was over a full day of pool time, plenty of long meals, and several attractions that were separate from the pass. Still, we saved over 55% on the face value of the pass. Attractions are so expensive in Las Vegas and are not always really good value so the pass means you can do and see things you just wouldn’t do without it.

As ever the Pass really made the trip as we tore up the strip doing whatever we fancied with very little pressure. We were a bit relaxed about the pass as we have done Vegas many times before. If we had been more focused we would certainly have had time to snag 3/4 more attractions and get even better value. But for this trip we wanted to do a whole lot more besides, especially a whole lot more doing nothing! 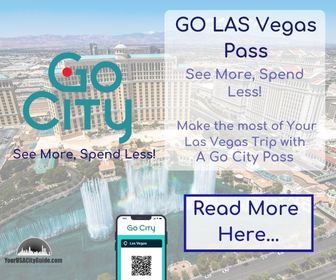