Weather can make or break a Trip and as such it’s always a very repeated question. I think we all have our own perceptions of what the weather in New York is like and It’s
mostly images of extreme cold. But What is the Weather like in New York City in Reality?

This article is intended to not only help you understand the City’s Weather and Climate but how to make the best of the weather and how to plan in a way that allows inclement weather to be less of a trip ruiner. You can’t change the weather but there are steps you can take to stop it completely ruining your trip.

New York has what is known as a Continental Climate. Meaning it has proper seasons. Cold in the Winter and Hot in the Summer. It also has a Proper Spring and Autumn (Fall).

While it’s possible to experience just about any type of weather in New York, the Climate is fairly stable and predictable most of the time. While it is susceptible to storms and extreme events they are rare and for most trips, the worst you will face is a chilly day, some rain and poor visibility or it might be too hot for much walking in summer.

You can learn a lot from studying the average temperatures in a city but after a while of looking at numbers, it all becomes a bit meaningless and you stop taking it in. As such I will focus more on what it actually feels like rather than just bombard you with Degrees Centigrade and Farenheight.

Of course, the numbers matter so I’ll get them out of the way right from the start The following two graphs show the Average temperatures of each month along with the average Maximum and the average Minimum. One in each flavour of Degree, depending on which you were brought up with. 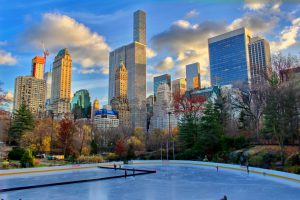 Winter can be Bitingly cold in New York. Ice and Snow can line streets and the air can plunge well into the minus’s However it’s not as cold as most people imagine, Especially in December.

Most people’s Winter New York Trips are timed for December so they can see New York all dressed up in its Christmas Finery. And for that reason, it’s a Magical time to Visit. But one comment you’ll hear over and over when planning is “Ooh It will be COLD at that time of year!”

Well not really, actually. It’s obviously, not going to be warm, although temperatures can and do reach unseasonably warm 16+degC 61+degF. But in General, it’s still more Akin to what you would associate with Late Autumn rather than the Depths of winter. A coat and a Jumper is all you will need for a full day Exploring, plus a hat, scarf and gloves on windy days. We have even enjoyed Central Park deli picnics in December!

Only Come January and February does the deep winter cold set in. And even then it’s not Arctic conditions. Just a Solid biting cold day. It’s not like parts of Canada where the Temperature Drop to -10 -20 -30!

It’s also the Driest Season. While it can and does rain any time of the year you can expect a lot of clear dry days in Winter. Brilliant for Photography even though the light can be challenging.

Of course, what is the norm is not always the case. New York is on occasion hit by large snowstorms and Arctic conditions. It’s rare but does happen. See my Extreme Weather section below. 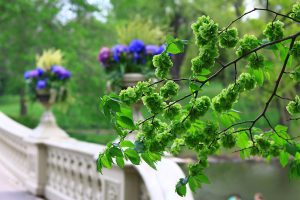 In Spring things start to warm up from the winter cold. The sun rising higher in the sky baths the City in glorious sunshine and the Colours begin to pop. It’s a fabulous time to visit. Avoiding both the Summer highs and the Winter Lows.

March can still register in the Very Cold bracket but as the months pass the temperatures rise. By the end of May, summer feels well on its way.

Rain can increase as the winter recedes with April and May being the wettest two months of the year with around half the days seeing rain.

When the Sun Shines and the and the rain stays away the city can be very pleasant indeed. Early morning and evenings can be cool still so Layers are the order of the day for clothing.

As Summer rolls in temperatures REALLY begin to soar. And that is not always a good thing. Average temps peak at a mere 25 DegC 77 DegF in July but that figure really belies the true intensity of a New York Summer. The Concrete Jungle has a huge influence on how intense that heat can become.

Really hot days will have you running for the AirCon, Which is thankfully very common in New York. Heat waves can and do happen with record temperatures hitting a dangerous 39 DegC 102 DegF on Occasion. While this, however, is thankfully rare, temperatures can regularly top 30 DegC 86 DegF in July and August.

Rainy days fall off thankfully in summer compared to Spring. Compared to Autumn and Winter there is still a chance of rain and Days can be wet with low cloud and poor visibility. So it’s still important to be flexible with your plans and your clothing. There is no point going up the Empire State Building if the cloud obscures your view. 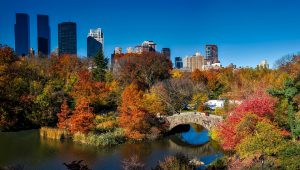 Autumn is a fantastic Season to Visit New York. As the Temperatures fall The Leaves turn to Gold and Red as the Skies remain clear and the city is bathed in wonderful colour. It’s slightly less busy (But that is relative).

As the Season goes on the Temperatures lower from Still very warm in September to almost Winter time temperatures in late November. Still, while the sun is shining if the wind is low the weather is fantastic.

Rainy days also drop off as the Season rolls on. But like spring Layered clothing is a good choice as the Mornings and evening will be cool but midday and afternoon can still be nice and warm.

The Wind is the one thing rarely mentioned and its the one thing that can transform a day completely. A cold Winters day is perfectly bearable in light winds but when the picks up it can feel Bitingly cold. Likewise, a pleasant Breezy summers day becomes Muggy and unbearable when there is no wind.

Unfortunately, there isn’t really a lot you can do about the wind. But be prepared if the temperature appears reasonable but the forecast wind is high assume it’s going to feel an awful lot colder. So extra layers or a windbreaker is sensible. In Summer if it’s hot, sunny and sticky with no wind plan for easy relaxed activities as it can get very oppressive in the concrete canyons of the city.

Rain is the ruiner of all trips. And especially New York trips. As Rain is often accompanied by low cloud, rainy days can often shroud the tall buildings in cloud. It goes without saying Trips to the Cities observation decks is not recommended. Everything in City is dull and less exciting. The lack of colour means sightseeing in general, is less pleasurable.

Museums are your friend should you be faced with Rain. Once snugly inside on of New Yorks many world-class museums you will not even be thinking about the rain outside. New York does receive a fair amount of rainy days. From up to 15 in April and May and at a low of 9 in February. A Rainy day, however, doesn’t mean it’s going to rain constantly all day.

It is possible to get snow anytime froNovemberer to May! Of course outside of winter, it will be short lived and not very disruptive.

In winter, Snow can stick around. New Tork Authorities and Its people are well used to snow however and unless particularly severe should not cause you much difficulty. You should allow a little longer for any journeys you are planning. Especially your Return Airport Trip!

Should you receive snow on your trip treat in as a bonus, You get to see New Nork at its most beautiful. 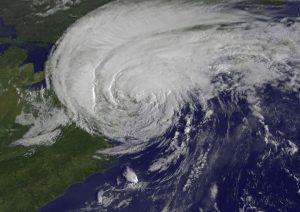 From time to time New York can receive bouts of Extreme weather. These are normally in the forms of server Storms. These could be Heavy snowstorms that cause severe disruption of even large Atlantic hurricanes moving up from the tropics.

Along with traffic grinding to a halt, the disruption caused can be from minor hassle like attractions shutting down right up to the cancellation of flights and closure of the airports. A big problem if you are flying out the next day.

It’s also possible in Summer to get Heatwaves. These are normally areas of low pressure and as such atmospheric conditions can trap dust and pollution at low levels making the city a fairly unpleasant place to be. Very hot humid and hazy. It can reach levels that are actually hazardous to your health. Especially if you have health problems already.

Fortunately, this level of severe weather is quite rare. It’s not really worth worrying about. Just Book your trip, make sure you have good travel insurance in place and always pay attention to announcements and statements from the authorities. In all likelihood, your trip will go off without a hitch.

Have you been to New York Recently? what season did you go in? how was the weather? Feel free to drop us a comment below. Maybe you are a local, and have a different take on the climate? Feel free to ask any questions you might have in the comments below or any concerns you may have for an upcoming trip we would be more than happy to assist.