San Diego’s weather is nearly perfect and the coastal region is gorgeous with stunning vistas of sandstone cliffs and bluffs. In fact, the people of San Diego are some of the most active folks in the United States, and a big part of the reason is that the seasons are mild throughout the year. With beautiful views on the shoreline and beautiful views from the sea, year-round, you cannot go wrong during any month, whether you want to hike and bike, or surf and sail.

We will break down the best times to go to San Diego, whether you want to be in the middle of a crowd or avoid other tourists. We also examine the subtle differences in each season, so you know when to go, what to pack as you plan your trip, as well as how to stay safe in the California Pacific Ocean once you arrive. With so many things to see and Do in San Diego getting perfect weather is very important!

The Basics of San Diego, California, Weather, and When to Visit

With an average daily temperature of 70.5 degrees, less than a foot of rain a year, 70 miles of coastline, and both a metropolitan downtown and scattered beach towns, San Diego is a paradise that is built for outdoor activities all year long. On the shore, there are great places to hike, trails to bike, horses to ride, rocks to climb, and walkable locales to visit with great boutiques, restaurants, and bars. And the coastline offers an array of water activities.

We have been to San Diego several times in every season, and we have never noticed too much of a difference in temperature regardless of the month. San Diego averages 146 sunny days a year and 117 partly cloudy days. While the rest of the United States has an average of 213 mostly sunny days, San Diego gets 267. Furthermore, the rest of America gets 110 days of rain a year, and San Diego only gets 21 days!

Moreover, there have been only five days of recorded snowfall in San Diego in 125 years, and the last measurable incident that occurred in Downtown San Diego and the suburbs was in 1967. The fluctuation of temperature is in a tighter window than most U.S. cities, which have low and high average temperatures that stretches from 26.5 DegF to 86.8 DegF (-3DegC – 30.5DegC), while San Diego always stays within a range between 50 DegF and 76 DegF (10DegC – 26.5DegC).

No Weather Page is complete without a series of Temperature Graphs so here are the Graphs for San Diego, for Average, average High, Average Low along with Rain amount and rainy days!

The peak season for San Diego tourism is July through October. In July and August, the temperatures reach into the mid-70s, and the beaches become packed with locals and visitors, looking for oceanfront property to lay their towels. Balboa Park, which is 1,200 acres of fun, with groves of shade trees and museums, is also a hotbed for activity. In addition, the summer nightlife really picks up in thriving bars and clubs, and festivals and concerts hit their stride.

The busiest time of year is in July, during the San Diego Comic-Con, which is an international convention that celebrates multi-genre entertainment, including animation, anime, video games, fantasy novels, comics, and science fiction and superhero films and television shows. During the four-day event, nearly 200,000 people flow into the city, so hotel costs spike and availability at many of the better places to stay are booked. There is also “Restaurant Week” and other culinary events in September, which brings the foodies to town.

The average low and high temperatures, humidity, and daily sunshine percentage for the summer months in San Diego, California, are the following:

In late October, the tourist season dies down, and from late October through mid-December, it is a great time to visit because you will see more competitive hotel rates and activity fees, and fewer people, if you need more space on your beaches. While the weather cools a tad, the Santa Ana winds pick up. These dry and warm winds blow into Southern California from the surrounding deserts. The winds do not arrive warm because of desert heat, but because San Diego is at a lower elevation than the surrounding deserts. Therefore, when the winds descend upon the city, it air compresses, which creates higher temperatures. This warm and dry spell really hits in October, creating fire hazards in the area, while also providing perfect temperatures for golfing and hiking, with clear air that increases visibility.

The average low and high temperatures, humidity, and daily sunshine percentage for the fall months in San Diego, California, are the following:

From mid-December to mid-March, the low season continues, with fewer tourists and lower costs, with the added intrigue of active and playful migrating gray whales that attract the whale-watching community. Numerous whale-watching expeditions can be chartered from the San Diego marina.

The average low and high temperatures, humidity, and daily sunshine percentage for the winter months in San Diego, California, are the following:

From mid-March through June, the sun often goes missing, hidden behind a marine layer that suffocates the coast in overcast skies. In particular, “June Gloom” can dissatisfy visiting tourists unaware of this weather condition, which occurs over large bodies of water like oceans and lakes. You might also hear “May Gray” and “No Sky July” because, during these months, cool ocean water often hits the warmer air, creating fog and clouds, with occasional drizzle. The air usually clears between the middle of the morning and mid-afternoon, so expect to see the sun appear sometime each day, no matter what.

Outside of the gray and gloom, the San Diego foliage blooms, bringing bright colors and beautiful landscapes for hiking and biking. Also, fish become lively, and it is the perfect time to drop a line in area lakes or in the deep sea.

The average low and high temperatures, humidity, and daily sunshine percentage for the spring months in San Diego, California, are the following:

Ocean Temperatures in San Diego, California, and Safety in the Water

While visiting San Diego you must dip your toes in the water at least once, but when you do, it might come as a surprise that the temperature of the water is quite cold. A phenomenon called the “Coriolis effect” creates these frigid waters, and it is why you will see surfers and other folks in wetsuits while in the Pacific, even when the sun is striking and the air is warm.

Basically, winds from the northwest blow parallel to the shoreline of the California coast, which causes the ocean surface water to flow offshore. This pushes deeper water, which is cold, to rise to the surface along the coastline. A flip side to this is this cold water also brings nutrients which in turn feeds and supports the huge Ecosystem and abundant life found on the coast. Including the sea Mammals such as seals, dolphins, and Whales.

Recently, San Diego has seen the highest sea temperatures on record. On August 3, 2018, the water reached 78.8 degrees. This is very unusual, and marine experts cite global warming as the cause. We have been in these waters numerous times to surf, and in the mornings and evenings when ocean swells are best, we did not see temperatures above 66 degrees in August, which is San Diego’s hottest month.

Check with local surf shops to determine the type and thickness of wetsuit you will need to stay protected against cold waters. Treat any water temperature below 70 degrees as dangerous. Between 60-70 degrees, hyperventilation can occur, which is when your body succumbs to “cold shock” that may lead to loss of breathing control. Furthermore, for people unaccustomed to cold water, MAXIMUM cold shock can occur just below 60 degrees.

Here is a rundown of normal San Diego ocean temperatures during each month of the year:

Other ocean dangers in San Diego include rip currents, which are powerful, channeled flows of water that move away from the shore. Rip currents can happen at any beach in California and usually occur between the shore and past the first line of breaking waves.  Once you are in the grasp of a rip current, the flow of water pulls you away from the shore. The instinct is to try to swim back to the beach, but it will only tire you and make for a more dangerous situation. To escape a rip current, you must swim with the flow of water and parallel to the beach, until you are outside of the current. Then, you will be able to quickly get back to the shore.

Furthermore, waves along the California coastline are no joke. Waves can be big and forceful and can create a dangerous situation. There are also sudden drop-offs, pounding shore breaks, kelp beds, and rocky areas that can create a danger. When participating in any offshore activity, never go alone and make sure you are properly trained for the task, whether it be swimming, surfing, or boating.

From Sunset Cliffs to Black’s Beach, there are lifeguards year-round. All other San Diego-area beaches have lifeguards in the summer and roving patrols in the winter. Most lifeguard rescues on the California coast are due to rip currents.

What You Should Pack For a Trip to San Diego, California

San Diego is the MOST casual big city in the United States. In the summer, you are overdressed in most places if you aren’t wearing shorts or a skirt, and flip-flops or sandals. When dressing up, a nice pair of jeans will do the trick, and a short-sleeved, button-up shirt. However, there are a few upscale restaurants that have a dress code, in which you might be required to wear a jacket. During any season of the year, it gets a little chilly at night, so bring a light sweater or jacket in the spring and summer, and a heavier jacket and warmer pants in the fall and winter.

For beachgoers, you will need sunscreen, sunglasses, and hats to protect yourself from the sun. Don’t forget to bring a swimsuit, beach blankets, and towels. A beach umbrella is also nice, and you can purchase or rent them near the beach, along with water equipment like surfboards and bodyboards, and wetsuits. And, don’t forget the snacks and drinks on the way to the beach; there are very few concessions or quick-and-easy beachfront restaurants on the San Diego shore, so you won’t find much to eat at the beaches.

There is never a bad time to visit San Diego, California. The weather is great all year long, though it can get chilly in the mornings and evenings during autumn and winter. Remember, May brings the “Gray” and June brings the “Gloom,” so expect to see overcast skies for much of the day, before the sun comes out in the mid to late afternoon.  Also, you seldom see temperatures below 50 degrees and highs above 75 degrees, so pack according to what best suits your needs under those circumstances, in order to prepare for those “dramatic” shifts in temperature.

What is your Favourite time of the year to visit San Diego? Do you prefer the hustle and bustle of the peak season to enjoy the best temps or do you take advantage of the quieter offseason and make do with the slightly cooler temperatures? Let us know if you have anything to say about the weather and climate around San Diego California or if you have any questions. Just leave us a comment below! 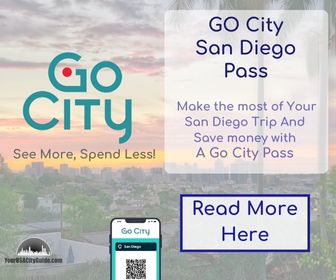