New Parks are a rare happening in New York, the City has many green spaces but these have mainly existed for decades as precious real estate is rarely converted into unprofitable park space since the early days of the City.

But rare does not mean unheard of and there have been several new parks pop up in the City in recent years, The High Line, Pier 45 – Hudson River Park, and the new green spaces opened up with the Hudson Yards Development. The Newest Park is the Little Island, opened in May 2021 it is the Latest green space for residents and tourists to relax and get away from the madness of the City.

What is the Little Island

Unlike so many Cities around Manhattan has one major disadvantage, it’s an Island, there is on;y so much space. Real Estate is some of the highest in the world and every inch is highly valued. New York is very lucky that huge swathes of land we put aside early on for parks, green space, and recreation. Not least the massive Central Park, but there are plenty of others.

BUT, setting up a new one, well that would be incredibly expensive. You would need to buy up an area of the City, then Buldoze wherever is already there, and then set up your park. This would be insanely expensive and there just does not seem to be many people willing to throw this much cash into a gift to the Manhattan populous.

But unfortunately, there is no other way to build a park, there is absolutely finite land and you can’t just build more land…

…or can you? Of course, you can, and Little Island Park has done just this. In fact, land space in manhattan has actually fallen as the hordes of docks that used to surround the city have largely fallen into disuse and after time literally fallen into the river! It’s on some of these fallen docks that Little Island has been erected providing a whole new park and green space in an area that would other would have been lost.

The Park was created with a really striking design, a series of 132 Concrete Pots in the shape of Tulips make u the 2.4 acres of park space. Inside the park, the landscape is quite hilly and there is a myriad of paths wandering around the Hillsides connecting the various viewpoints, lookouts, and points of interest.

The Island has had a hard start in life with many objections, funding issues, and real doubts as to whether or not it would ever actually be built!

The plan was formulated as far back as 2010 when The Highline Trust approached Businessman Barry Diller who put up the initial finance and worked with the design team, Hethwrwick Studios.

The plan ran into continual roadblocks, falling foul of certain planning and environmental permits, and was constantly challenged by the City Club of New York. It does not seem the City CLub had any real basis for the objections other than personal and professional rivalries between the Dursts and Barry Diller, but the constant Court Objections cause the project to overrun in duration and cost to the point Barry Diller finally pulled the plug.

However, the City was really on the side of the project and in the end, came to the rescue providing the final financing and pushing through any final permits require so the building could commence in April 2018.

Finally, the Project ran into the worldwide issues that surrounded the pandemic but was only moderately affected seeing as the project had come so far.

It finally opened in May 2021 to a reasonably muted fanfare due to ongoing Pandemic issues but has remained open to the public ever since.

Getting to Little Island

The Island Sits on the West side of Manhattan literally over the Hiudgeon River, it is located beside the Whitney Museum at the edge of the Meatpacking District, right near Chelsea Market. It marks the southern terminus of the High-Line which joins up with Hudson Yards and the Intrepid Museum Making this a perfect addition to any itinerary in this area.

The Nearest Subway is the ACE blue line at 14 st / 8av. This tracks all the way up to Time Square and beyond so provides easy access to most tourist locations. However, we advise either arriving or leaving on foot via the Highline and joining the trip up with a visit to Hudson Yards, where you can hop on the 7-train back to Midtown. We tend to head to Hudson on the 7 first, explore there, head on up the Edge, do a little shopping, maybe head to the Intrepid Museum and then walk the Highline down to the Island, but make either way works really well.

How Much Does the Little Island Cost, what are the opening times

in 2021 Timed entries were required after Noon, but this has been discontinued for the winter, and maybe reinstated, or not for the Summer. Timed Entries were free but required booking.

There are also some ticketed concerts, these are mostly free and where there is a charge they are very low cost.

What to See and Do on Little Island

The 2.4 Acres of park space are fairly compact, certainly compared to the rambling sprawl of Central Park, and there are only a few highlights to the park. Visiting can take as little as 2-30mins or you can take longer to just rest and relax, taking in some sun, or just resting in the park’s peaceful surroundings. Especially welcome after hiking down the High Line!

The Amphitheater, known simply as the Amph is at the hear of the Island. This small performance space is a place to sit and relax or during the summer to catch one of the many performances.

There are limited Concession stands in the park, and not really much in the local area. These are only operated in the summer months and are little more than a coffee van with a few snacks. Nice enough is desperate but nothing to seek out deliberately.

The main area of the Island is known as the Playground. It is really just a Plaza area as opposed to a real playground and just a place to congregate and take in the green space.

The Glade is a little nook, located on the west side of the Island. It’s low down, nearer the water level, and offers nice views out over the Hudson and Lower Manhatten. It can be a nice spot to hide away from the crowds.

The Surprisingly hilly nature of the Island means there are a few nice high vantage points for views out over the City. The Northwest Look-Out offers views over the Hudson River, the Southwest is the Highest and gives amazing vistas of downtown, while the Southeast, looks back down the Hudson River Greenway.

Dotted around the park are several acoustic instruments such as chime bells and walk-on chimes. These are fun little easter eggs to hunt out and have a go on yourselves, however unmusical you are. You can also be sure someone will be along shortly who can actually play the instruments properly!

Perform in the Park

During the summer there are a series of free or low-cost performances on a regular and ad-hoc basis, keep an eye on the schedule to see if something is coming up when you are there.

If an event is ticketed then it is usually still free, but some incur a small charge.

What to See Nearby

Have You Been to the Little Island? What did you make of the park and What were the highlights of your visit? Did you catch a show? How were the crowd levels? Was it worth the trek out to it? Whatever your experience just let us know in the comments below 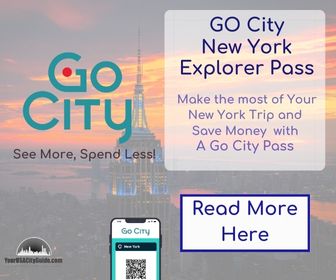