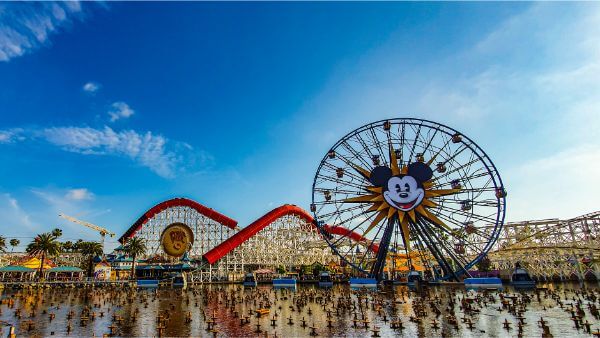 The Incredicoaster is Disneyland’s only Ride that features an Inversion (for now). It is one of Dinsey California Adventure’s more grown-up thrill rides and is a big draw for the park and the newly Re-themed Pixar Pier. As the ride is now nearly 20 years old, is a lick of paint and a new theme enough to keep this coaster up to date? Are the LIM launch system and loop element enough to compete with Rival Coaster and keep the Incredicoaster up there with the best Rides at Dinsey Californa Adventure? Or is this just an aging coaster destined for retirement and the scrap heap? We took a ride to bring you the Incredicoaster Review. Here is everything you need to know about the ride.

What is The Incredicoaster

Disneyland is not known for its big thrill rides and most rides are more along the lines of fun thrills or highly themed rides. There are however a few exceptions in Dinsey’s California Adventure and the Incredicoaster is one of them.

Themed around the Pixar film Incredibles this big steel coaster launches riders up to 55mph in only 4 Seconds and has some impressive air-time, great bank, turns, drops, and Disneylands only Inversion. It’s a simple loop midway through the ride. The Coaster is one of the Parks headline attractions and helps keep the more grown-up clientele happy.

Previously known as the California Screamin’ it has been re-themed along with the Paradise Pier, now the Pixar pier to make use of Disney’s Pixar properties. The Coaster takes center stage at the park next to the Pixar Pal-A-Round with the loop cleverly framing the large Pixar Pier Sign.

The Theming and the Queue are pretty poor. We really liked the old theme, which was basically just a rollercoaster and we find the new elements add very little to the experience. In the queue, there are few screens trying to explain the pretty pointless story and they are quite forgettable.

If you can, use Genie+ to skip or utilize the Singer Rider line. Of course, it is worth noting while the Incredibles theming a letdown, the overall Pixar Pier theme still shines through as you experience an old-school coastal pier complete with a Ferris wheel and midway-style games all with a Pixar twist. We really like the pier, just find the Incredibles theme does little for the ride.

Some Elements completely passed us by such as the Cookie Aroma that is supposed to be pumped into the Sound Tubes, we really never notice it.

The Single Rider line is a great way to skip the long Stand-by queue. The ride is a 2 across format to any odd-numbered group means a single rider space and these go fairly quickly, from walk-on to 10 mins when busy, or longer if luck is against you and spaces do not need filling. It is nearly always faster than the standby line, however. If the Single Rider looks huge, then walk away and come back later to see if it’s shrunk.

With the less-than-brilliant theming, Poor queue experience, and the lackluster Incredible’s tie-in, the Ride has a long way to go to make up for its deficiencies. However, a really good rollercoaster speaks for itself and does not need all the bells and whistles a well-themed ride provides. The Good News is the Incredicoaster is just that!

It is NOT the biggest and fastest Coaster in the world but the ride is silky smooth and the layout makes for a whole load of fun. Starting with the launch which is a solid 0-55 in 4 seconds. Far from record-breaking but a really fast getaway all the same. The initial Launch fires you up the first hill over and an air-time ramp inside a sound tunnel before picking speed back up before a long banking turn and then eventually up the second hill where launch motors power you up and over the top.

Along the way, the Characters attempt to recover Jack-Jack using their various skills but these details are largely unnoticed while you are actually riding as you are more focused on the actual coaster. After the second lift hill, you plummet back down at speed through another highspeed banked turn before hitting the loop. The loop appears quite small but does not feel that way as you loop around due to the quite slow speed at this point.

After the loop, the ride is only really halfway there in terms of length and the rest of the ride continues along the theme of small drops and banked turns. It is a really long ride and covers quite a distance, nearly 2km in total length. Making this the 8th longest Rollercoaster in the world (as of 2019) and the longest Coaster anywhere that features a loop!

The Ride is nice and smooth throughout and is never terrifying just a good solid coaster accessible to most people. Disney always does a great job of ensuring its rides are accessible to the most amount of people and they could have easily made the headline coaster too big and too scary for most, but the Incredicoaster is more about being a really fun, smooth, and excellent ride!

Overall the Incredicoaster is a really solid addition to the park, fast and big enough to excite coaster fans but not so intimidating it scares off more moderate riders. We tend to be a good judge of this as I will ride anything but Kate is far more reserved, but both rode and enjoyed the Incredicoaster quite a lot. The theme is a bit limp but the Coaster easily makes up for that and provides a smooth yet fast and really thrilling ride. You really do focus more on the ride and less on the Theming elements so nothing is lost, just enjoy the coaster for what it is. A really good coaster!

Let us know what you think of the Incredicoaster. Is it Incredible or Incredibly rubbish? We really think the ride is not too intense and will suit most people who enjoy the moderate-style coasters Disney Leans towards. Do you agree or did you find it too intense? If you have something to say just leave a comment below. Also, let us know if you have any questions and we would be happy to help.