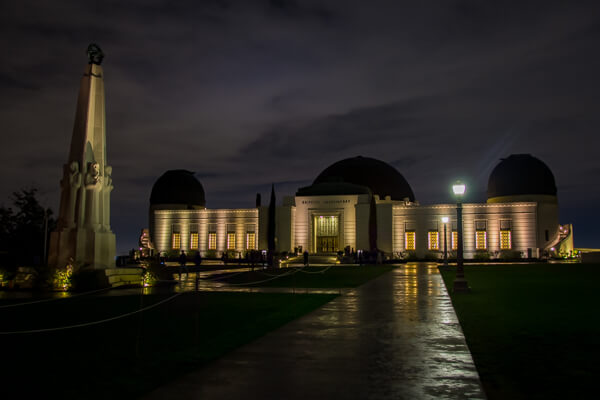 What is the Griffith Observatory?

The Observatory was built at the bequest of Griffith J. Griffith who owned the land where Griffith park now stands and was built as per the specs in his will, along with the creation of Griffith Park and the Greek theatre as a lasting legacy to himself. It was a good move as it’s unlikely anyone would know of him now had he not donated the land and funds to build the observatory. As it is the Name Griffith is uttered by almost every person who visits Los Angeles.

The Observatory itself is a real working observatory with two large powerful telescopes that are available for public use, free of charge. along with several smaller portable scopes that are set up in the grounds on stargazing nights.

There is also a Planetarium which was incredibly popular in the era it was built but fell out of favour before a recent resurgence due to improved video technology enhancing the experience. There is also a great deal of exhibition space and many interesting exhibits.

Last but not least is the location. This is prime L.A Real estate and would be worth $Billions to a property investor. This is one of the most valuable public parks in the USA probably only beaten by Central Park. The reason…the View. The park has mind-blowing vistas over the L.A Basin and the towering skyscrapers of downtown, not to mention one of the best views of the Hollywood sign. It’s raised location over Hollywood would mean houses here would sell for hundreds of $millions. And it’s all here for you for free. You have to love the eccentric millionairess of the past! Talking of Free…

Prices- How much does it cost?

We have some really good news here…The Observatory is FREE TO ALL!…Sort off.

The Main attractions are all free there is just a small charge to watch one of the Planetarium shows and of course, as this is L.A there is a charge to park. This Makes the Observatory one of the best value attractions in L.A and definitely worth a visit. Even if it’s just for the views.

Obviously, you can drive up to the Observatory, Parking is pretty plentiful but it does get very busy even when the observatory is closed but you should get a spot if you are patient. On very busy days it may be advisable to avoid driving and get the shuttle bus.

Ladottransit offer a low-cost shuttle bus that runs every 20 minutes until 10 PM every day from Hollywood. There are multiple stops along the way starting at the Vermont / Sunset Redline Metro stop. Prices are well ridiculously cheap. So cheap we wonder why they bother but a cash fare is a staggering $0.50cents. Compared to $4 per hour parking it’s a bargain and could save a fair bit of faff. If you are in Hollywood chances are you have already shelled out for some parking so just jump on the bus instead of moving the car.

Up to date pricing and schedules here

There is free parking at the Greek Theatre and from there you can take on of the Hiking trails up to the observatory. We don’t really recommend this unless you actually want to enjoy the Hike. The walk is pretty steep and offroad but it’s a lovely hike with stunning views and very rewarding. Obviously, the hike back is much much easier!

What to See and Do? 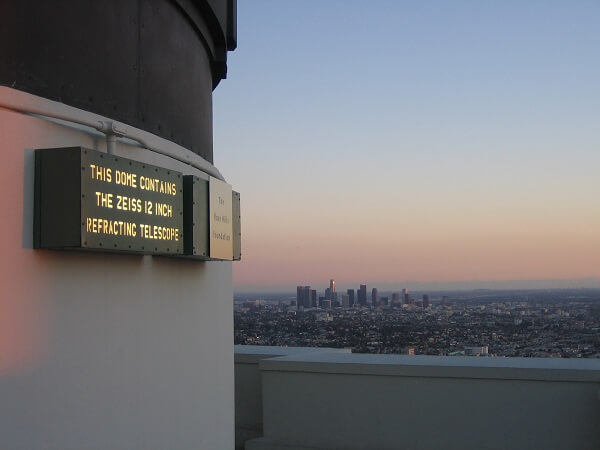 The only Paid attraction at the Observatory the Planetarium has regular shows going on throughout the day with various and regularly updated themes. A planetarium is a large domed screen which the movie is projected onto giving the impression of being in the movie. So if it’s space you fell (a bit) like you are in space, and underwater movie and you feel under the water. It’s kind of like an old school Virtual Reality!

These Planetariums fell out of favour and were considered relics and widely ignored in recent decades after their initial popularity. They were invented when TV was not even a thing, at least not as we know it and as such mesmerised audiences. But with TV and Cinema and even video games progressing so much the crude and old-fashioned shows simply could not compete. Iconic examples such as the Observatory’s survived simply for nostalgic reasons and as they operate as not for profit. But most closed and were demolished.

Popularity has resurged however as the very reasons they failed, rival technology, has reinvented and updated the experience. In 2002 a major overhaul of the observatory and Planetarium took place to bring this dinosaur right up to the present day. His resolution digital projectors now bring the subject matter to life like never before. This combined with a raised interest in science from the public has made the Planetarium a Mush see experience once again.

There are several shows available and these are narrated by a live storyteller (Probably not Raj From the Big Bang Theory) These shows change every now and then but the current shows are:

Of-course this popularity has a downside, ticket availability can be sparse. The Observatory does not allow pre-booking apart from for members. So you have to hope for availability on the day. Tickets are only available for the next 2-3 shows at a time. Available from the ticket counter or from the machines dotted around. So if the next available shows are sold out if you can hang around until the next lot of shows goes on sale you should have a good chance of getting tickets. Weekdays are often quieter but there are more shows available at weekends.

Check here for all the latest information on show times and prices along with when the tickets go live!

We really love the Planetarium its a great mix of modern imagery and knowledge combined with a really nostalgic hark back to the past, and we think you would love it too. And for only a few $ it’s well making this part of your experience. The only issue is the time it takes to actually book tickets queue for the show and finally see the show. This whole process can easily take 1-2 hours even on quiet days and much longer if you have to wait for shows to become available. This means its not really something for a flying visit. 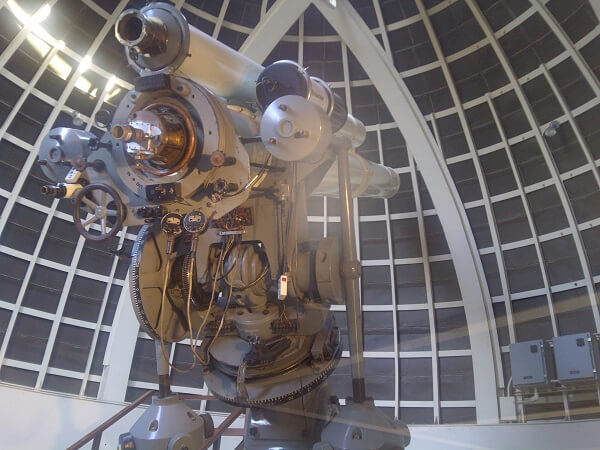 There are two main telescopes at the Observatory, the Main telescope is a large 12-inch Zeiss refracting telescope. With the help of volunteers, you can view a large array of celestial objects through the scope such as the moon, the planets and even some galaxies, the staff will ensure you get to see the best of what is on offer that night. The Telescopes operate every night the Observatory is open AND the skies are clear. Being a traditional optical telescope there is very little to see if there is cloud cover.

The Other Main scope in operation is the Coelostat scope. This telescope breaks the number 1 rule of astronomy. Never Look at the Sun! That is what the Coelostat telescope is designed for…Sun Gazing. The Telescope at the observatory offers 3 incredible views of the sun either through eyepieces or a projection of white light showing and visible sunspots (or Eclipses!) the spectrohelioscope, is a huge complex filter that strips away a lot of the visible light leaving incredible images of the sun and its surface that actually show solar flares and other activity. 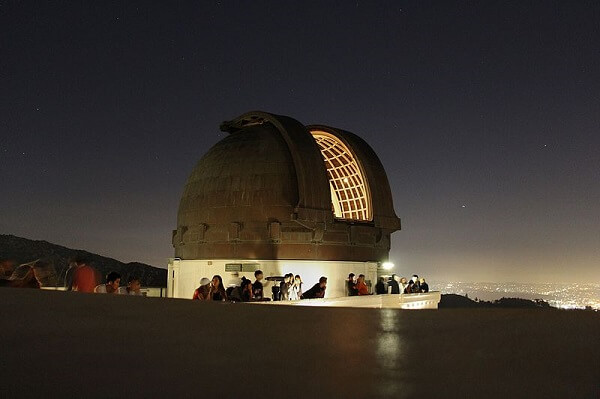 On one Saturday every month the Observatory hosts Stat Parties where local astronomy clubs volunteer to set up telescopes on the grounds and allow the public to view a large number of objects in the night sky. These are fun and informative day and well worth checking out if you are there around these dates. However, you can be assured it’s going to be busy! 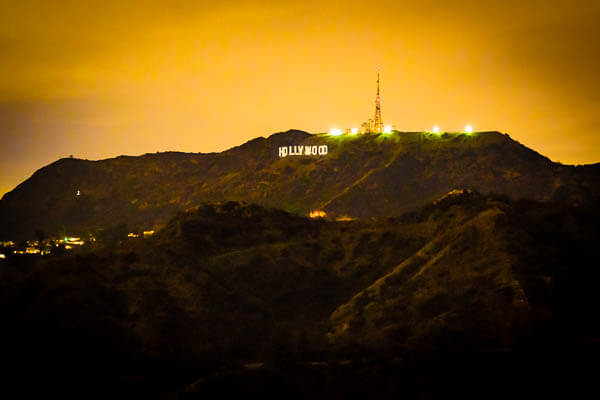 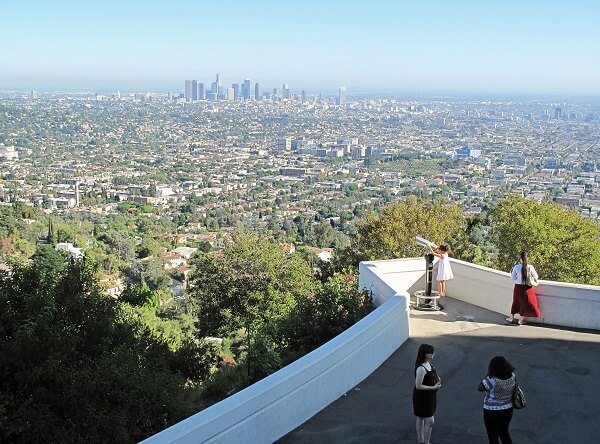 Yeo We have saved it till last but the number one reason to make the trek all the way up to the Observatory is the simply staggering views of the L.A Basin, the hills and L.A Downtown. It is the view of a lifetime and first-time visitors will hardly believe their eyes.

The L.A basin is an unbelievably massive urban area and the concrete prairie stretches out as far as the eye can see and way beyond, it’s like an ocean of urban living disappearing over the horizon. The epicentre of it all is the downtown skyline rising up from the pretty low rise city. 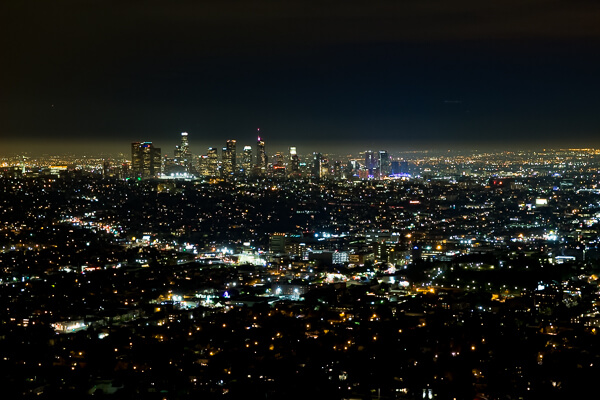 By day it’s a staggering view and at night it gets even better as the sparkling city lights enhance and enlarge the scene to epic proportions. It has to be seen to be believed as the lights genuinely spill out past the horizon and you can see the freeways snaking their way out across the city like arteries. It is wonderfully beautiful.

The Observatory is built so there are walkways and lookout point the whole way round providing full panoramic views of L.A. This affords plenty of room to set up a tripod to catch some fantastic shots of the city. 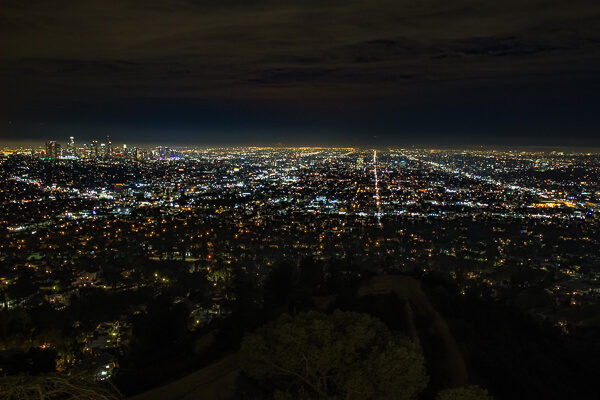 Have you been to the Griffith Observatory? Did you see a show or look through the telescopes? What time did you go? Day, Night, Both? Maybe Sunset? Let us know your thoughts and experiences in the comments below. Also, drop us a comment if you have any questions at all regarding the Observatory.