We really love Attraction passes and whenever we head to a City always go armed with a pass of one sort or another (Vegas, New York, Los Angeles). This trip to San Diego was to be no exception and we bought 2 San Diego Go Passes. We went for the three-day passes as we really wanted to check out the changes at Seaworld and catch the new Orca Show. Only the 3, 5, and 7-day passes include Seaworld. As we are using the Pass for this trip we will take the time to do a San Diego Go Pass Hands-On Review to show exactly how we use the pass and to show how good value the pass can be in terms of both cost-saving, and convenience. Check out our FULL in-depth Review for more information.

The Plan for today was Sea-world. The Pass allows you a multi-day visit so we thought the best plan was to visit sea world as soon as possible in case we planned to return later in the trip. However, as you might have noticed from the Page Title, we didn’t end up visiting Seaworld today as planned!

Why? we hear you ask? Well, San Diego has a very stable and dry climate and is practically desert most of the time, but sure enough, our arrival brought about the arrival of some very rare May Rain! And not just a couple of showers but a large system passing through depositing a lot of water. Tomorrow afternoon’s plan was to check out the museums of Balboa Park, but the rain forecast to have blown over by around lunchtime we figured this was the perfect opportunity to head to the nice and dry indoor museums. We love this feature of the Pass that you can simply chop and change your plans and itinerary whenever the weather deals you a sucker punch! If we had pre-bought Sea-World Tickets we would have been resigned to visiting the park in the torrential morning weather!

Balboa Park is San Diego’s version of Central Park and is a stunning and wonderful green space right in the middle of the City. It is also studded with a host of unique and wonderful Museums as well as being home to San Diego Zoo. While the Park is free most of the attractions are paid attractions, almost all are included on the San Diego Pass, Including the Zoo.

The first stop was the Air And Space Museum. From the looks of the Parking Lot, we were definitely not the only people who have the idea to head to museums today. The Forecast was proving spectacularly accurate, the rain was pouring down and we were forced to dash from the car to the foyer rather quickly.

A quick scan of the pass and we were in and wandering about. The Space exhibit is very interesting with some really good artifacts such as an Apollo Lunar Command Module!. The Flight Capsules are utterly terrifying. To imagine someone strapped into that and flying through the vacuum of space is quite unthinkable.

The Air Portion is a good eclectic mix of Aircraft, ranging from some replicas of the very early planes including the Spirit of St Luis, and a great selection of WW2 aircraft including a Spitfire, P-51D Mustang, and a BF-109 Meshersmchit! If only they had a Type-Zero…Oh, wait they Have!

More Modern Aircraft were a bit lacking with only really an F/A 18 Hornet. Apart from that, the only Jets are earlier 60’s/70’s aircraft. Cool enough but we like getting up close to some modern machinery. They do however have one of our favorite aircraft of all time, the Lockheed Blackbird (A12). This takes pride of place outside the building welcoming you to the museum. However, we did not really have time to admire it as the rain was teaming down still.

At the Parking lot for the Natural History Museum, Things were getting really busy. After circling the main and overflow lots we still had not found a space and needed to wait for someone to leave. Unfortunately, this meant a long dash to the entrance in pretty horrendous rain. A bit soggy but we were at the door. Thinking how glad we were we were not at SeaWorld right now!

The Natural History Museum is a great attraction. Filled with cool, fun, and educational exhibits. From Dinosaur Skeletons, Whales Skulls, Life Size Great White, and some Stuffed animals from the local area from both the present and the past.

We wandered around for a good hour enjoying the exhibits until we started to notice the skies clearing and the sun coming out. It was around Lunchtime now and we made a beeline for the Zoo to enjoy the afternoon in one of the best Zoos in the World!

We love San Diego Zoo and while the $56.00 entry is a little steep it’s reassuring to know it goes to a great team of conservationists. And really for a full day’s entertainment, it’s not that bad. And you really can’t come to San Diego and not visit the Zoo, One of the reasons we love the Go City Pass.

The Skies were wonderfully clear now and the temps ramping up nicely to a comfortable but bearable 60°f/20°c. We Always start the Day at the Museum on the Open Top Bus Tour that basically does a loop of the Zoo to help get your bearings and help you know where to head first.

After the tour, we headed for the Reptile House. This is a huge collection including some stunning, beautiful, and LARGE Snakes. There are also the wonderful Giant Tortoises that are great fun and let you get up close and personal. Next up Were the Monkeys and Tiger Trials. The Tiger Enclosures are really great and give the magnificent animals a large and diverse habitat to live in. The Monkey enclosures are always a hit as they run and play about. The Gorilla Enclosure is also in this area and they are truly staggering creatures, they really feel like looking way back into the past, their human characteristics are very striking.

Next on the list was getting lost! We were trying to find the Giant Pandas and were really struggling to get our bearings. Eventually, we found our way to the large bridge over the Panda Canyon and used the life to get down. Unfortunately, only Days before we arrived the Giant Pandas had shipped out. The Breeding Program coming to an end, with rumors this is a victim of the Current Trade War With China. The San Diego Zoo has housed and successfully bred Giant Pandas for decades and is renowned for the exhibit so it’s pretty gutting to see them gone and news of their impending return is not looking great. A big loss for the zoo.

Next up were the African Giant’s Rhino’s, Elephants and Lions. Then heading for the Australian Exhibits and the Giraffes including a super cute Foal. Before heading back through the New Africa Rocks Exhibit. From here we headed back up to the canyon bridge and headed over to the Skyfari. The Queue was pretty awful as the throughput is minuscule but we waited and got a birdseye ride back to the Exit.

It had been a Wonderful Afternoon with so much to see and do. After not really having anything for lunch we were ravenous by now so headed to Mission Valley for some food.

The CPK has become a huge Success story of late, Mainly due to their early adoption of Gluten-Free and healthier Pizza offerings, and has been opening locations all over the State, It has somehow managed to stay off our “Done That” list for quite a while, far too long in fact so it was about time we put it right. So after the Zoo, we headed to Mission Valley. Home of Cheap Chain Hotels, Large Shopping Malls, and endless Chain eateries. It’s the perfect location for some Cheap Eats and a bit of shopping.

We managed to time our arrival perfectly as we had an hour of Happy hour reaming, So we grabbed some cheap drinks and Bargain Pizza, The trade-off being we had to sit at the bar but that’s no issue for us. The regular menu does seem a little overpriced as it’s is essentially just Pizza but ordering from the Happy Hour menu was excellent value and the Pizza was top quality Pizza. Thin Crispy but bags of flavor from the topping.

We are huge big bang theory fans and have watched since it began all those seasons ago. When the program first began we had no idea what the Cheesecake factory was and had never really visited the States as adults. Since then Both The Cheesecake Factory, Visiting the States, and Big Bang Theory have become entwined in our lives Somewhat. So it seemed fitting the Shows Final Episode would air while we were in the States and what better way to watch it than Eating Cheesecake from the Cheesecake Factory (Which if you somehow didn’t know is featured heavily in the show, or at least it was early on in the show.)

So We skipped Dessert at the Pizza Kitchen and grabbed some Take-out Cheesecake from the Mission Valley Cheesecake Factory to say a tearful goodbye to the Show from our Hotel Room. The TOASTED MARSHMALLOW S’MORES GALORE Cheesecake was utterly heavenly.

It really felt like a fitting ending to the Trip and the show and we were emotionally ready to head home…But then we realized we still have 3 Days left on the trip and got ready for another manic day Exploring San Diego Tomorrow, This time the Forecast was sun sun sun and we got ready to head to Sea World!

As we are using the Go San Diego Pass we will keep a Running Total day by day to show you the value we are getting from our passes. We always travel in a realistic manner and only visit attractions we want to visit. No loading up on attractions just to get max value. Attraction Passes are meant to make our trips better, if they hinder us in any way then any money-saving is pointless. So we take our time and just visit attractions that we want to and if we want to do something else not included on the pass we just do it. However, even with this approach, we get great value from the passes. As you will see.

So We were over halfway to breaking even after only a single day. We also had experienced firsthand the advantages of the flexibility the pass can offer. As the rain caused us to completely change our plans on the spot and head indoors in bad weather as opposed to spending the morning miserable and drenched at Seaworld…or worse out of pocket.

Tomorrow the weather was forecast as hot and sunny so Seaworld was back on the menu. 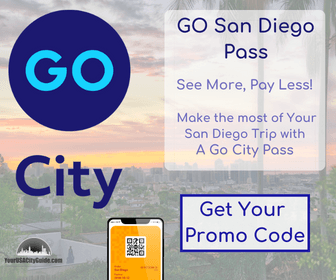